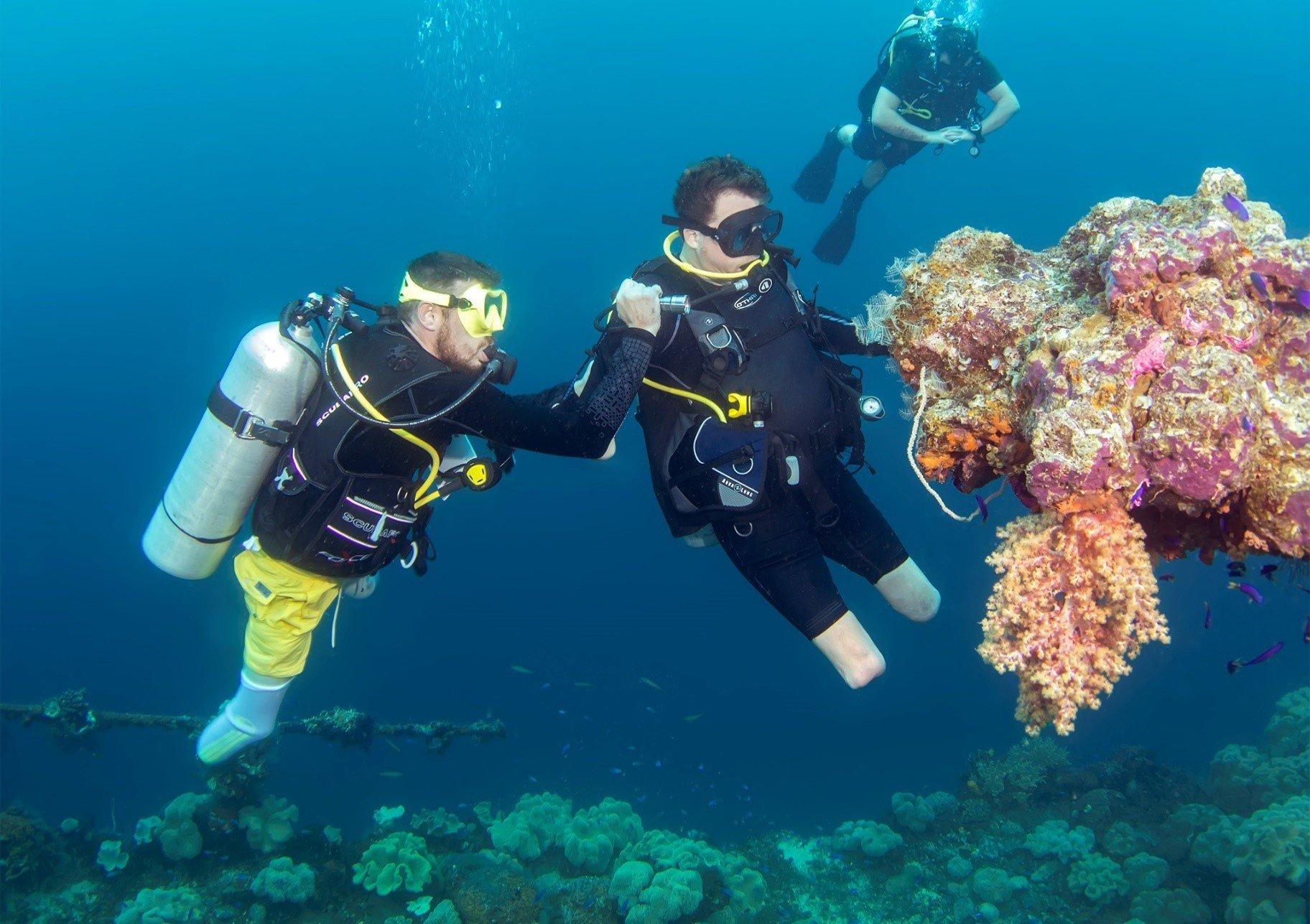 A team of military veterans from the charity Deptherapy and Deptherapy Education, supported by Coral Cay Conservation (CCC), set out in August 2018 to Chuuk Lagoon, Micronesia, to collect critical ecological data from the Shinkoku Maru, a shipwrecked World War Two vessel, and now the fruits of their labours have been released.

Following extensive training at ROOTS Red Sea in May 2018 with CCC members, the Deptherapy team set out to undertake preliminary data collection protocols through scuba to ecologically map the fauna and benthic community residing on the Shinkoku Maru. The aim was that the data, and subsequent report, would be delivered to resource managers and government bodies in Chuuk Lagoon, to provide greater ecological clarity and evidence to facilitate management practices.

This expedition contributes to a wider effort by Deptherapy following the launch of their ‘Protecting our Oceans’ campaign, where Deptherapy members ‘give back’ to the oceans that have given so much to them. The aim of the campaign is to raise awareness of the plight of the world's oceans, and for Deptherapy programme members to make their own practical contribution to environmental protection. 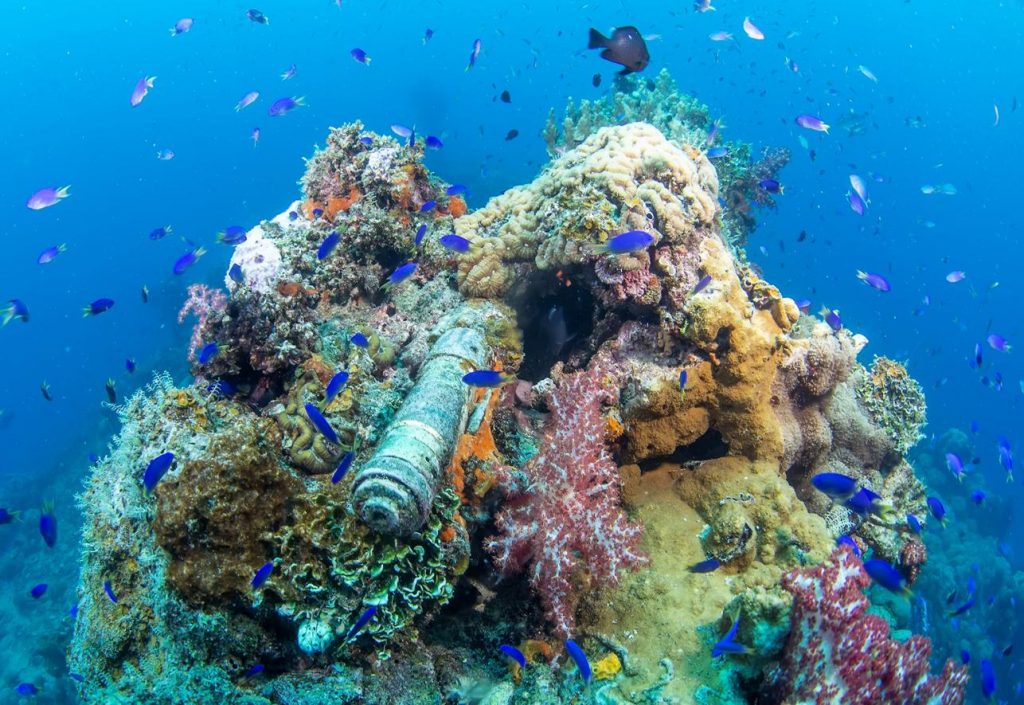 The resulting scientific report from the expedition, authored by CCC's Head of Science, Tom Dallison, and Deptherapy member Ben Lee, and supported by Bear Grylls OBE, highlights, notably, that personnel suffering from various physical and mental ailments hold the ability to undertake such studies and that efforts to conserve our oceans are accessible to all; overcoming the barriers associated with the rigorous physical demands of undertaking scientific data collection protocols through scuba.

The coral reefs of the Pacific region, including the Federated States of Micronesia (FSM) and Chuuk Lagoon, are in relatively good health and account for approximately 25 percent of the world’s coral reefs, making the region a diver’s paradise. Chuuk Lagoon is one of the world’s largest lagoons, composed of over 2,000km2 of coral reef and lagoon habitat (with an additional 200km barrier reefs), and is an important bio-geographical link between the Coral Triangle and other Pacific island groups. In addition to boasting some of the most-extensive coral reef systems in Micronesia, Chuuk Lagoon also has a rich military history and is well known among the dive community as the lagoon hosts approximately 50-60 World War Two shipwrecks, including 12 aircraft wrecks. One of these shipwrecks, and the wreckage assessed by Deptherapy team members, is the Shinkoku Maru, which is a large Japanese oil tanker, found between 11m-37m.

In addition to the localised physical impacts to coral reefs caused by World War Two, the lagoon has continued to experience severe environmental impacts through overfishing, pollution and rising ocean temperatures. Derelict vessels have often been utilised, or intentionally positioned, to compensate for natural reef habitat loss and the loss of biodiversity, with evidence presenting high levels of diversity and fish biomass. However, evidence further suggests that, in fact, derelict vessels or shipwrecks support distinct reef-associated fish and benthic communities, possibly increasing an area's resilience to environmental impacts. As such, Deptherapy's assessment provides insight into the current ecological status of the Shinkoku Maru wreckage, delivering incentives to the dive tourism industry and contributing to conservation efforts in the region. 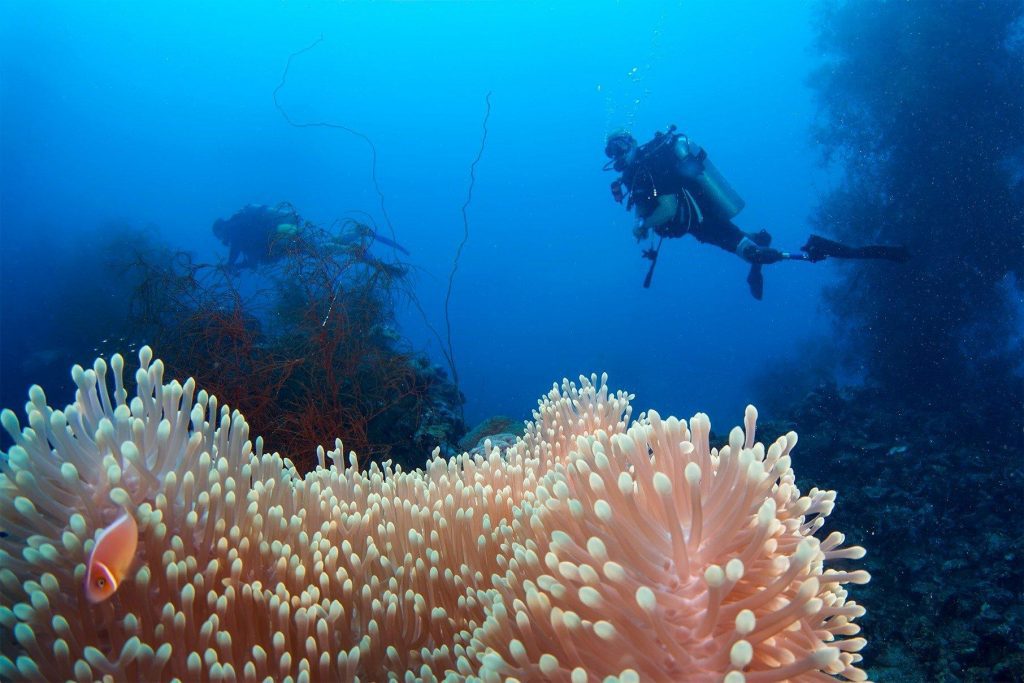 In order to effectively assess the ecological community of the Shinkoku Maru, the wreck was split into two segments (bow and mid-section) to record fish diversity and abundance data. The wreck was then further split into three segments (bow, mid and stern-section) to record the relative composition of benthic substrates that included hard coral and the respective lifeform (branching, massive and sub-massive, etc).

Fishes were recorded as an exposure rate (per minute) by the Deptherapy team, with surgeonfish (Acanthuridae) recorded in the greatest abundance, followed by the eastern triangle butterflyfish (Chaetodon baronessa). Throughout the assessment of the wreck, the survey team were also greeted by 12 whitetip reef sharks (Triaenodon obesus) and one turtle. The exposure rates and diversity of fishes was a positive find for Deptherapy, with an abundance of marine life found across the entire wreckage. Following the sizing (cm) of each individual fish, it was found that species were dominated by smaller individuals, often an indication of overfishing as the majority of larger fish are removed by fisherfolk. The sizing of individual fishes enabled the Deptherapy team to calculate biomass (kg) which was found to differ between each section of the wreck, indicating that specific areas were favoured by particular species, possibly driven by refuge or prey availability.
Assessments of the benthic community found that hard corals covered approximately 25 percent of the wreckage, with a fairly homogeneous distribution across the entire wreck, proving both positive from an ecological perspective and touristic potential as, due to the range of depths, divers of all abilities can enjoy the diverse corals of the vessel. The lifeform of the recorded hard coral was also found to be homogeneous, further supporting the wreck's accessibility and ecological value.

The abundance of a seemingly even distribution and diversity of hard corals on the Shinkoku Maru wreck, as well as the presence of specialised obligate corallivorous butterflyfish species and apex predators, such as whitetip reef sharks, indicates that the community associated with the wreck is in good ecological status, proving positive for the ecological characteristics and services of the survey area as well as for tourism. However, low levels of biomass and the dominance of smaller individuals should be investigated further.

Ben Lee summarised the Chuuk Lagoon expedition and the achievement by the survey team: “Completing the study was a massive achievement for the Deptherapy team, not only because we had accomplished our set aims in Truk (Chuuk), but also proved to the world that we, as disabled veterans, missing limbs and having mental health issues, can conduct our own conservation-orientated studies and help in the protection of our oceans – a pledge we have made through our ‘Protecting the Oceans’ campaign.

“For me it was a challenging task to achieve, not only for the guys involved but for Tom Dallison at Coral Cay Conservation, having to train and educate seven injured veterans that had no knowledge of the marine biology world or any idea of how the coral reef ecosystem worked underwater. To then hand that knowledge down to more of our team and complete the task of mapping the life of the Shinkoku Mary wreck proved that we had the power to use the knowledge to educate others on Deptherapy programmes, and we will continue to do so on our future courses.

“The study we carried out helped the charity promote our new ‘Protecting the Oceans’ campaign, showing the scuba world that even with some of the worst physical and mental injuries we, as one, can help educate the world about the damage we are causing to our oceans, and carry out data collection that is vital to presenting the problem to the required governing bodies.”

You can download the full report, Chuuk Lagoon, Micronesia: a 2018 Ecological Assessment of the Shinkoku Maru Wreck – 2019, here.