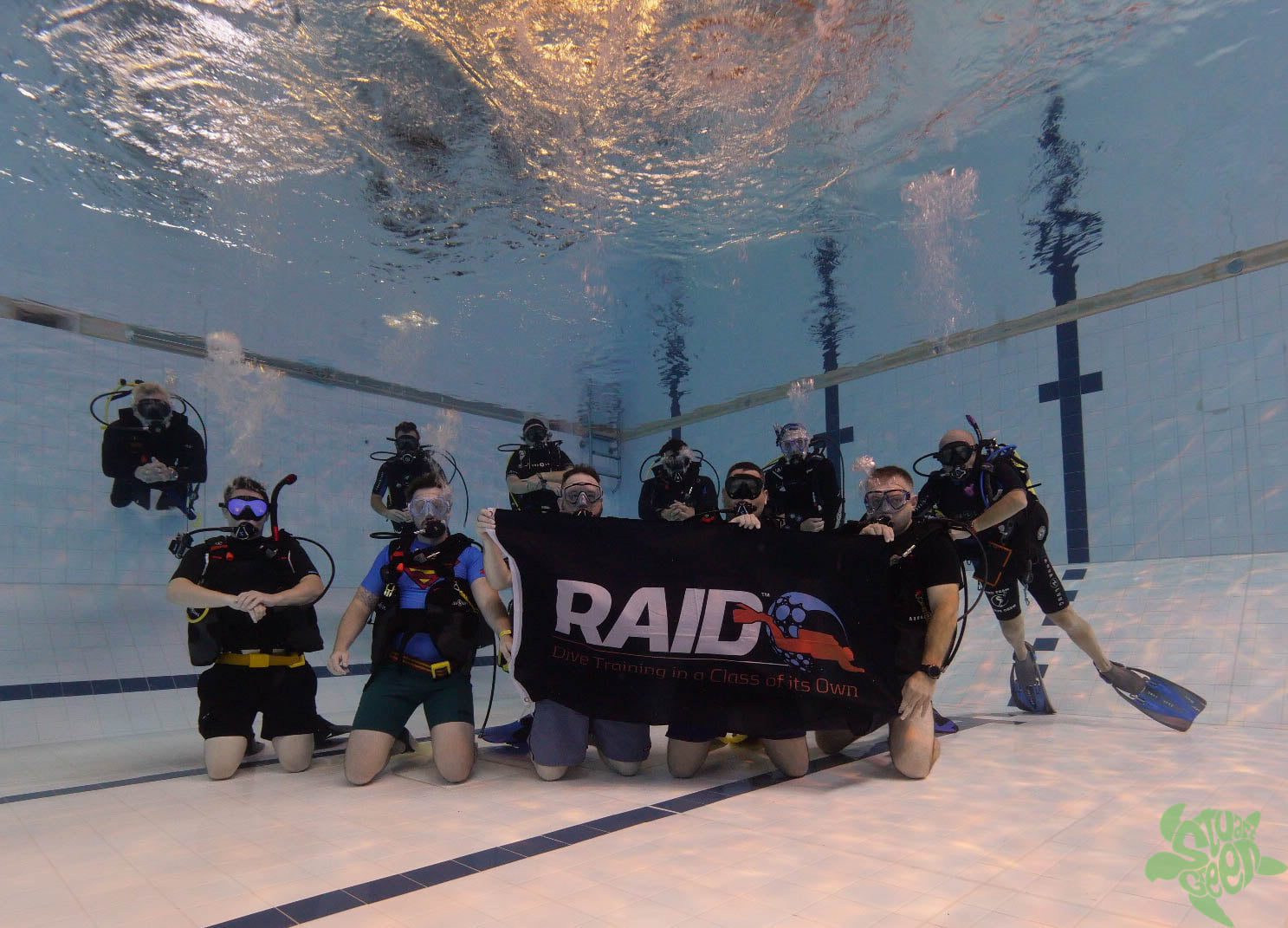 The expression ‘adapt and overcome’ is used extensively among those Armed Forces’ veterans who have suffered life-changing mental and or physical challenges. The expression demonstrates a mindset, a mindset that says however bad things may be, by adapting how you do things, you can overcome any obstacle placed in front of you.

COVID has prevented scuba-diving rehabilitation charity Deptherapy running an open water course at their home base in Egypt – Roots Red Sea – since 2019. Three expeditions have necessarily been cancelled and the charity has a growing list of applicants who have experienced life-changing mental and/or physical challenges.

Deptherapy’s Board of Trustees decided that the charity should ‘adapt’ to the present circumstances and ‘overcome’ them by running a RAID OW20 course in the UK.  Between 15-17 August, that became a reality for five new beneficiaries.

Richard Cullen, Deptherapy’s Chair and Head of Operations said: “Putting together a course in the UK offered the team massive logistical problems, with beneficiaries travelling from Scotland, Eastern, Northern and South Western England, as well as the Home Counties. One of our instructional team travelled from Yorkshire to assist on the course.”

The course was funded by a grant from the Veterans’ Foundation and Richard explained that without their support it would not have been possible to run the course.

The team had to organise; hotel accommodation, book a pool and open water dives, source kit and needed to buy new drysuits as the five beneficiaries were well above the size of ‘average students.’

Berkshire’s Divecrew dive centre provided most of the equipment and support.  Because of Divecrew’s relationship with Eton College they were able to book the College Pool for the confined water sessions. The 25-metre pool has crystal-clear water and offers a 4m-deep end. Deptherapy is extremely grateful to Eton College, who opened the pool especially for Deptherapy and provided lifeguard support.

Open Water dives were organised at Wraysbury Dive Centre on 16–17 August and as usual Richard and his team at Wraysbury gave everyone a first-class welcome.

It was pleasing to see, for the first-time members of the ‘blue light services’ participating in the programme, albeit that the two serving police officers had previously served in the Armed Services.

Three of the students have Post Traumatic Stress Disorder, one had anxiety problems and another Multiple Sclerosis.

The student with MS struggled with his swim and although he was allowed to complete his confined water skills, he will complete his swim when the charity next travels to Roots.

The five had one-to-one tuition and in the case of the student with MS he was supported by an instructor and a Divemaster. Deptherapy maintains a high instructor-to-student ratio in the early stages of learning.

Dr Richard Castle, one of Deptherapy’s Vice-Presidents, is an independent consultant psychologist specialising in Trauma, attended the confined water sessions at Eton. He put together his reflections of the day and among these he said: “While the focus at the pool was on the mechanics of scuba diving for beginners, the real benefits for those experiencing the effect of chronic psychological disorders (such as PTSD) and/or physical injury, is the fostering of trust in a safe environment where our beneficiaries feel able to talk about their experiences in a common language.”

At the end of the open water dives at Wraysbury, Deptherapy had four new and very happy open water divers, with one waiting to complete his course at a later date in Roots.

Gary Daye, one of the students, who had travelled from Scotland for the course said: “I served in the Scots’ Guards with Tom Oates and Keiron Bradbury, we shared the same experiences in Afghanistan, we saw the same horrors of war; what we did as soldiers has bonded us together as life-long friends. Keiron and Tom spoke about how Deptherapy had changed their lives and continued to support them. I honestly didn’t know what to expect and I certainly wasn’t prepared for what happened. Somehow the team create an atmosphere from the first moment you come in contact with them that says it is ‘OK not to be OK’, and that is so important. I have been bitten by the scuba bug, I have been bitten by Deptherapy, I can’t wait to get back in the water, I am joining a dive club where I live.”

All five will travel to Roots when Egypt opens up for travel on the next Deptherapy Roots expedition.

Richard Cullen said: “Logistically putting together the course required a good deal of effort; far more than booking the flights to Hurghada and then leaving the rest to Steve and Clare and their team at Roots.”

When the trustees formed Deptherapy they had a vision that one day that Deptherapy’s instructors and Divemasters would have been veterans who had been beneficiaries on the programme. On this course Sean Martin and Tom Oates were helping the students on the course, and both will soon progress from being Divemasters to be instructors.

Dr Castle said: “It was also great (and not a little poignant) to see people who have been within the Deptherapy family for some years (and who have faced their own physical and/or mental demons along the way) now acting as self-confident instructors in the pool.

“This is not only pleasing to see but this integrated peer support undoubtedly fosters the trust for newer members of the family to engage.   We can all do the theory on how to heal from mental trauma but it is those that have been there and have got the t-shirt who really feel the mental turmoil arising from exposure to trauma, be it personal injury, involvement or repeated exposure (as in vicarious trauma).”

On 3 September, Deptherapy travels to Malta where eight programme members will undertake a RAID Advanced Wreck Course as part of a build-up to a marine biology expedition to the Red Sea on Roots’ liveaboard Big Blue. In Malta, the team will be working with Malta’s Divewise and Techwise.