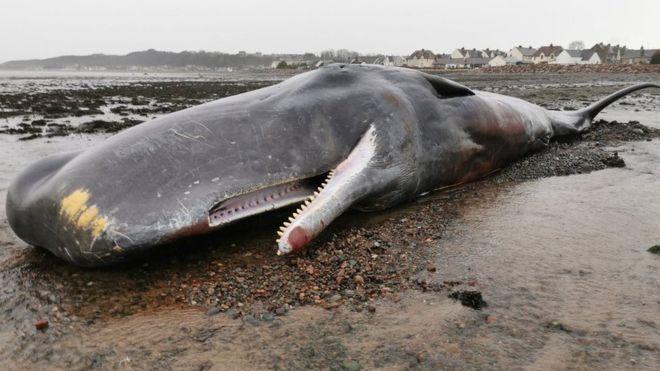 A young male sperm whale which became separated from its ‘bachelor pod’ and subsequently grounded in the Moray Firth, sadly dying a few hours later, had to be put under guard due to fears of people stealing the animal’s teeth.

The 15-metre, 20-ton whale, which was first seen in difficulty near Ardersier on Monday 6 January, was being watched over by members of the Coastguard and British Divers Marine Life Rescue, but unfortunately could not be saved.

Charlie Philips, a field officer of the Whale and Dolphin Conservation organisation, said: The whale, which was otherwise in good health and had been feeding well a week or so before its death, was examined and a port-mortem revealed it may have had a brain problem.”

“At the time of the stranding, we also had Coastguard officers on the scene acting as ‘policemen’ because all stranded whales belong to the Queen, and people have a habit of trying to steal sperm whale teeth because they are quite valuable.”

Dr Andrew Brownlow, from the Scottish Marine Animal Stranding Scheme, was involved in the port-mortem, and explained that sperm whales that become stranded on the east coast of the UK tend to be teenage males, whose normal feeding grounds are in the deep ocean trenches between Scotland and Norway, and that this individual had probably made ‘a navigational error’.

He said: “When it comes to the middle of winter and they are thinking of heading back down to their breeding ground in the Azores, it seems they make a navigational error and rather than go through the Pentland Firth and through the Minch and down the west coast of Scotland, they end up in the North Sea, which is not a great habitat for them, as there are no real food sources.”

According to the Highland Council, the whale was subsequently buried on Wednesday 8 January after being moved to farmland to minimise public health concerns.

British Divers Marine Life Rescue will be at the GO Diving Show (21-23 February) at the Ricoh Arena – come along and find out more about this worthy charity, as well as enjoy talks from the likes of Steve Backshall, Andy Torbet, Miranda Krestovnikoff, Monty Halls and Alex Mustard, various interactive exhibits, not to mention 80+ exhibitors including scuba manufacturers, training agencies, travel companies, tourist boards, resorts, Liveaboards and much more. Book your tickets now! www.godivingshow.com/dive-show-tickets/