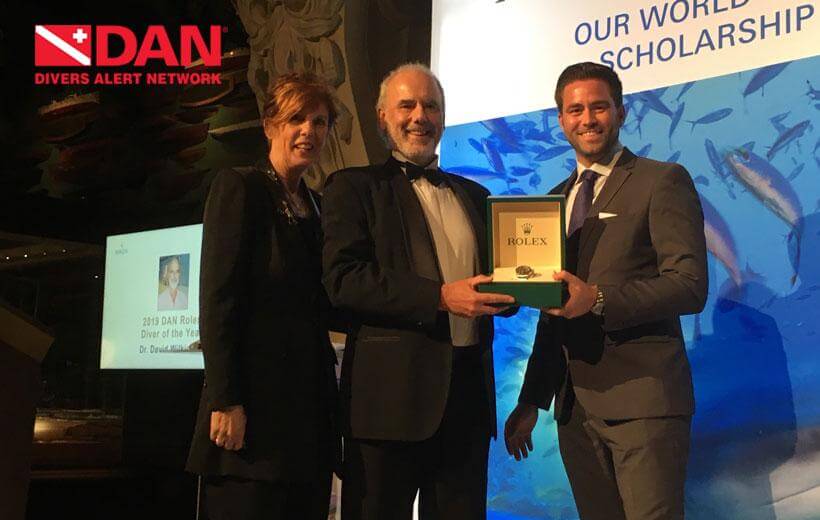 Divers Alert Network and Rolex have announced that Dr David Wilkinson has been selected as the 2019 DAN/Rolex Diver of the Year. The award was presented on Saturday 13 April at the Our World-Underwater Scholarship Society 45th Annual Awards Programme in New York.

Dr Wilkinson is a senior staff specialist in anaesthesiology and the medical director of the hyperbaric medicine unit at the Royal Adelaide Hospital. A researcher and educator, he is also a clinical lecturer at the University of Adelaide and a fellow of Undersea and Hyperbaric Medicine. He became captivated by hyperbaric medicine one day while working in the Royal Adelaide Hospital’s intensive care unit. When a colleague was taking a patient to the hyperbaric department, Wilkinson asked if he could accompany them, and he was completely fascinated by the chamber. “There was an element of frontier medicine about it,” he said. “It took my fancy.”

He has since dedicated his career not only to diving medicine but to treating many of the ailments that can be improved with hyperbaric oxygen therapy. And rather than being content with the accepted limitations of hyperbaric medicine, Wilkinson has pushed the envelope of its utility, studying its effectiveness in treating even more conditions, including diabetes and the side effects of radiation therapy. He was awarded the Order of Australia Medal for services to hyperbaric medicine.

An advanced nitrox and decompression diver, Wilkinson sits on the board of directors of the Australasian Diving Safety Foundation/DAN Asia-Pacific Foundation, an organisation dedicated to advancing dive safety throughout the Asia-Pacific region.

Physicians in the hyperbaric medicine unit at the Royal Adelaide Hospital (and in recent years, other Australian hospitals) operate Australia’s Diving Emergency Service (DES) hotline. The DES hotline is accessible 24 hours a day, seven days a week to provide medical guidance to injured divers in need. The hotline’s toll-free number is fully funded by DAN World, and the doctors who take these calls are unpaid volunteers. More than 20 years ago, Wilkinson took over as co-ordinator of the DES hotline and has personally fielded the majority of the calls that have come in since then. Currently the hotline receives about 400 calls each year.

For the past 30 years, DAN and Rolex have collaborated to honour an individual who has made significant contributions to dive safety – and to name that person the DAN/Rolex Diver of the Year. This award began in the late 1980s as a generous grant to DAN from Rolex to recognise the organisation’s work on behalf of divers. In 1989, the award evolved to feature a specially engraved Oyster Perpetual Rolex Submariner dive watch. As part of the award, Rolex makes a US$15,000 donation to DAN to help fund the dive safety research DAN does. The DAN/Rolex Diver of the Year award is now one of the most-prestigious honours in scuba diving.

“David’s commitment to hyperbaric medicine and his volunteer work with the Diving Emergency Service hotline have helped thousands of divers get the care or practical medical guidance they needed when they needed it most,” said Bill Ziefle, DAN president and CEO. “The dedication he has shown to the dive community in the last two decades is truly inspirational, and we’re thrilled to honour him as the 2019 Diver of the Year.”