Data from the deep – scientific expedition with Sonia Rowley

With my face glued to the car window, mouth agape, making ‘ooos’ and ‘aahhs’, I kept Vaughn and Kayem well amused as they drove myself and Sonia through the stunning scenery of Pohnpei to Nihco Marine Park. Even after a month spent on the island, my jaw never ceased to drop as I was constantly blown away by the island.

I came to Pohnpei with the brilliant evolutionary biologist Sonia Rowley, winner of the David Attenborough Award for Exceptional Field Work in Science. And boy, is her field work exceptional. With the use of rebreather technology, she is able to go to depths that few would even fathom of going to. Daily she would descend the reef walls of Pohnpei and its atolls to 140m to collect data from the deep. Her muse that takes her to this incredible environment are gorgonians, also known as fan corals. Since very few have explored down there, there are so many new species yet to be found, and after most dives Sonia would surface holding a new species! 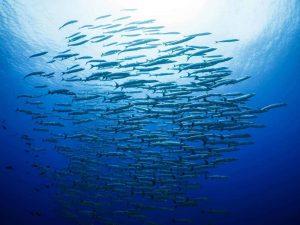 It’s impossible to define the work that Sonia does as it manages to cover every aspect of marine biology from evolution, ecology, molecular and behaviour. It was truly inspirational to see this woman in action, as I’ve never met anyone with such tenacity and drive to conduct research. Subsequently, we created an acronym for SONIA (Sub Observing Nearly Into the Abyss) and would shout ‘Deploy the SONIA’, as she descended looking like a space rover with countless tools clipped onto her for the multiple experiments and data collection she would conduct during her six-hour dive.

As a newbie to rebreather diving, I stayed at 30m. However, I was still able to dive for three hours and was tasked with identifying the sponge species found at different depths to help build a pattern of the distribution of species with depth. It was apparent that life was not restrained to the shallows, but penetrated all the way to the deep, but what exactly drives the distribution of species is still a mystery to scientists.

As I had my head tucked into the crevices of rocks and caves to look for sponges, I would often miss whitetip reef sharks, grey reef sharks and swarms of barracuda just inches above my head! But even with such mega fauna present, there was still the stark reality that the reef of Pohnpei and its surrounding atolls were not healthy. After a devastating hit of coral bleaching last year, we were greeted by reefs that were mummified in algae. With a multitude of stressors hitting this habitat, such as overfishing, crown of thorns and more algal growth, the chances seem slim that they can recover. However, there is still hope. And I do hope they recover since not only do the locals rely on the reef, but this place was purely magical to dive and I hope to one day return to it brimming with life once more.