In a recent experiment scientist placed miniature 3D glasses on a Cuttlefish and showed it some films. While this may sound like something that was dreamed up after a few to many drinks at the staff Christmas party, the people involved did have a very clear objective.

The experiment was designed to ascertain if Cuttlefish use depth perception to hunt. Pervious experiments on Octopus and Squid had shown that these creatures do not have 3D vision so the team from the University of Minnesota wanted to discover if the same could be said of Cuttlefish.

A Cuttlefish was placed in a tank, the glasses were attached and a shrimp was projected onto the wall of the tank. The cuttle fish would then move into a strike position and attack using it tentacles. The glasses help to make the strimp appear in 3D and more life like and the use of the projector allow the scientist is alter the perceived distance of the shrimp. 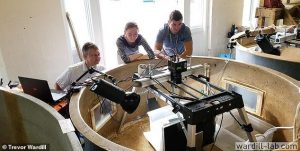 The results showed that the while the Cuttlefish could still hunt with just one eye it was much quicker when it had the use of both. This was a clear indication that the creature uses depth perception much like humans.

The use of depth perception is known as Stereopsis, it is the perception of depth produced by the brain when it receives visual stimuli from both eyes in combination.