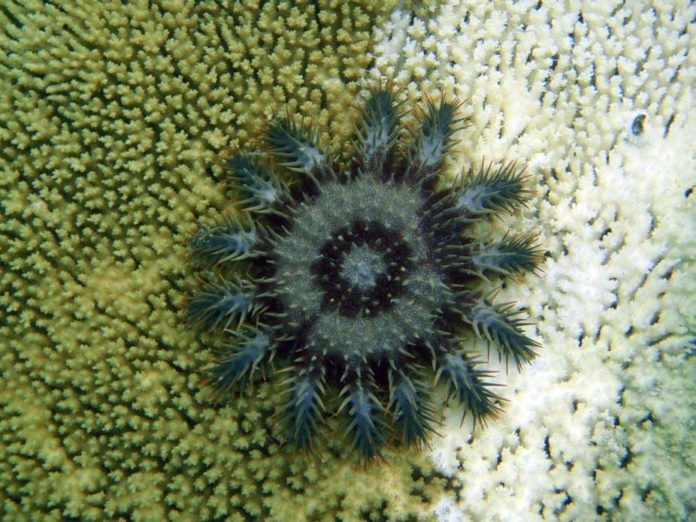 When Crown of thorns starfish attacks occur they can cause serious damage to the reefs they infest. The staple diet for adults is coral and they have a voracious appetite for it.

On healthy coral reefs, the crown-of-thorns starfish have a functional role, eating the fastest growing corals such as staghorns and plate corals and allowing the slower growing coral species to become more established. This may help increase coral diversity. However with the Great Barrier Reef also having to contend with global warming so a crown of thorns attack has a far greater impact.

There are over 3000 reefs in the Marine Park across 344,400 square kilometres so priority reefs have been identified based on a range of information, including connectivity modelling predictions, tourism visitation data, the current coral cover, crown of thorns starfish outbreak status of reefs, and operational capacity to effectively control them.

The first broad-scale, government-funded crown of thorns starfish control program began in 2012. To date the control program has been successful in maintaining starfish densities below ecologically sustainable thresholds for coral growth on 75 per cent of the 57 priority reefs between Port Douglas and Townsville.

However new research by scientists from the university of Sydney has discovered that Crown-Of-Thorns Starfish Can Build Their Numbers For Years before attacking Reefs.

“Despite the notoriety of the large adult starfish and their propensity for coral prey, the juveniles eat algae. For outbreaks to arise, these algal-eating juveniles must transition into coral predators.”

It is now believed that  juvenile starfish can delay their diet shift to coral for at least 6.5 years.

“This Peter Pan effect means that populations of juvenile crown of thorns starfish can build up on reefs in the absence of coral. “They could become a hidden army waiting to consume reefs as the reefs recover.”

The team conducted an experiment to determine when this transition occurs. They reared two groups of starfish on algae for 10 months and 6.5 years. Both cohorts grew to the same maximum size – 16 to 18 millimetres. Despite restricted growth on a vegetarian diet, there was no impact on the ability of the 6.5-year-olds to eat corals. After provision of coral prey, the one-year-old and 6.5-year-old juveniles had the same growth pattern.

“The remarkable resilience of juvenile starfish to coral scarcity complicates our ability to age them and indicates the potential for reserves of juveniles to accumulate on the reef to seed outbreaks when favourable conditions arise.”

“The research shows that starfish modelling needs to account for the possibility that an extended herbivorous phase of crown of thorns starfish has the potential to allow the formation of a reserve population in reef habitats.”

“Another important implication of our findings is the possibility that the current adult starfish killing programs used to manage crown-of-thorns starfish might, in fact, trigger a feedback mechanism in the starfishes' transition to coral predator as juveniles are released from adult competition.”

“Nevertheless, even if current reef protection methods are flawed, it is not clear what should occur instead. Byrne sees little alternative to programs that remove all the adult crown-of-thorns from the reefs most frequented by tourism and she stresses excess fertiliser damages coral in other ways.”

“It's possible that animals that prey on juvenile crown-of-thorns have been depleted by human activity. If so, the best thing we can do is bring them back, but first they would need to be identified.”

Predators of adult crown-of-thorns starfish include the Giant Triton Snail, the Maori Wrasse, Starry Pufferfish and the Titan Trigger fish. Predators of the starfish in its younger life stages are less known. 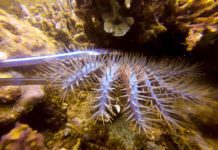 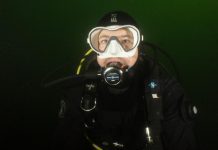 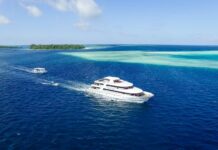