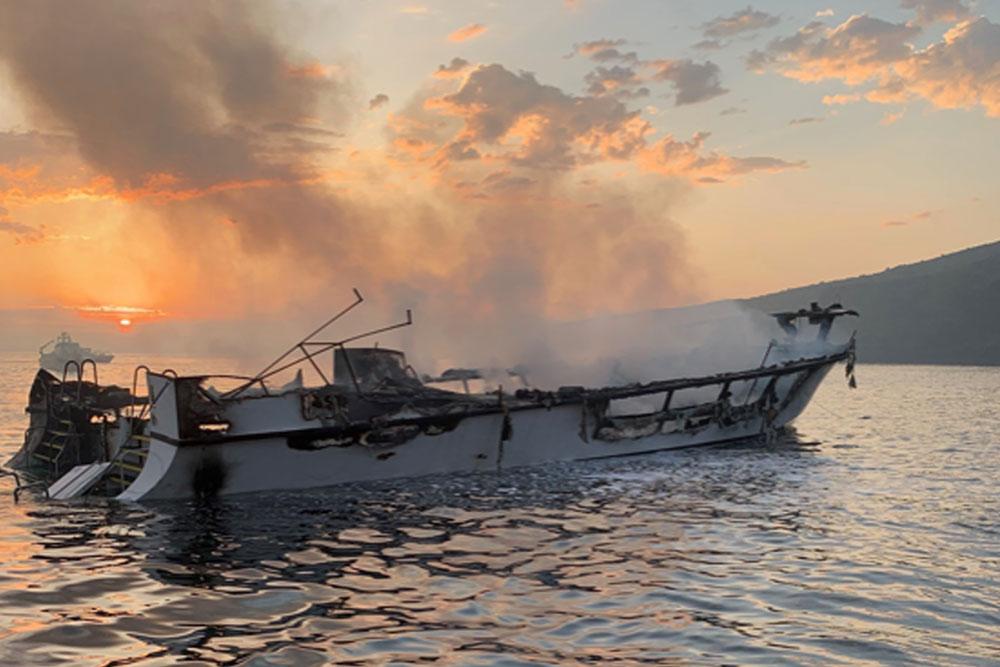 Tragically, the worst fears of the California boat fire yesterday have been realised, as authorities confirmed that 25 bodies had been found, leaving nine still unaccounted for.

According to Coastguard Lieutenant Commander Matthew Kroll, rescue and recovery teams had recovered 20 bodies from the California boat fire and discovered five more which, due to the unsafe conditions under the remains of the upturned boat, are unable to be recovered at this time.

He added that four bodies that were recovered in the midst of the initial rescue operation had injuries consistent with drowning.

As we reported yesterday, fire engulfed the dive boat Conception, which was anchored near Santa Cruz Island, in the early hours of the morning, leaving 34 people missing.

Crews from the Coastguard, Santa Barbara Fire Department, Ventura County Fire Department and Vessel Assist rapidly responded, and the fire departments present were busy battling the fierce blaze when the vessel sank some 20 metres offshore in 20m of water, with just a portion of the bow sticking up above the surface.

Of the 39 people onboard, the five crew escaped on an inflatable boat and made it to a ‘good Samaritan’ pleasure craft, The Grape Escape. They were all soaking wet, in their underwear and the captain had apparently broken his leg. According to the owners of The Grape Escape, Bob and Shirley Hansen, two of the crew returned to the water in the inflatable to search for any other survivors, but their mission proved fruitless.

Sadly, that left the other 34 people aboard the Conception unaccounted for. There were initial reports of some fatalities, and the fear was that many of the passengers may have been trapped below deck given the fire broke out in the middle of the night – tragically, this has proved to be the case.

The Conception was part of a fleet of vessels operated by Santa Barbara-based Truth Aquatics for charter trips to the Channel Islands National Park.