Blue shark euthanized after beaching itself in Majorca 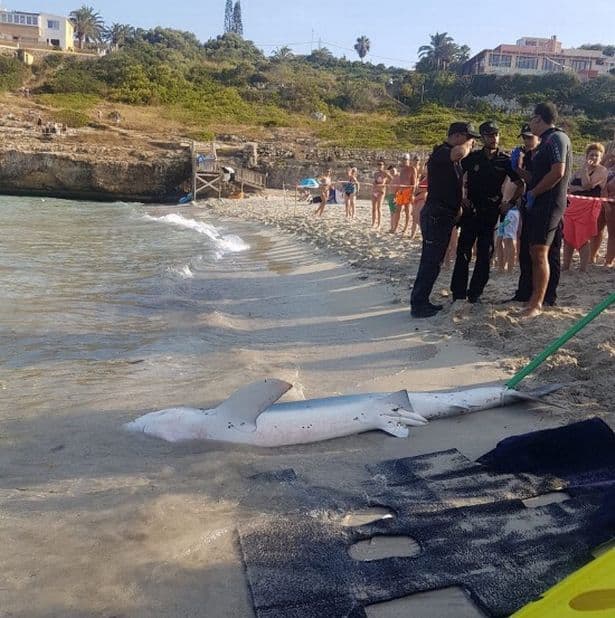 A two-and-a-half-metre blue shark which swam into the shallows off a beach on the popular holiday island of Majorca on Thursday was euthanized by experts from Palma Aquarium when it was discovered to have been disorientated after being stung a stingray.

Tabloid media gleefully reported of panicking tourists fleeing from Cala Domingos beach when the shark was first spotted seemingly swimming normally in shallow water, and police apparently closed the area off. Social Media later erupted as footage emerged of the shark being dragged up the beach by several men, and news broke that it had, not surprisingly, died.

However, on Friday, news was released that the shark had been euthanized by staff from Palma Aquarium’s Recovery Centre after it was deemed its health meant it was beyond saving, and a subsequent autopsy showed it had been stung in the mouth by a stingray.

Guillem Felix, a veterinary nurse with the Recovery Centre, explained that they had received a call to say a shark was swimming off the beach and appeared to be swimming normally. He said: “As part of standard protocol, we waited for an hour because such behaviour can be normal and doesn’t necessarily mean the animal is ill or distressed.”

He continued: “Unfortunately, we got a second call an hour later to say the shark had ended up writhing on the sand and lifeguards had put it back in the water, but it had subsequently returned to the shoreline several times, even hitting submerged rocks.

“When we got to the scene, the shark was lying about 15 metres off the coast in about 1.5m of water, not moving and hardly breathing, and so we made the decision to put it out of its misery.” An autopsy revealed it had been stung by a stingray in the mouth, where all the important nerve endings are, which had led it to stop eating and becoming disoriented.