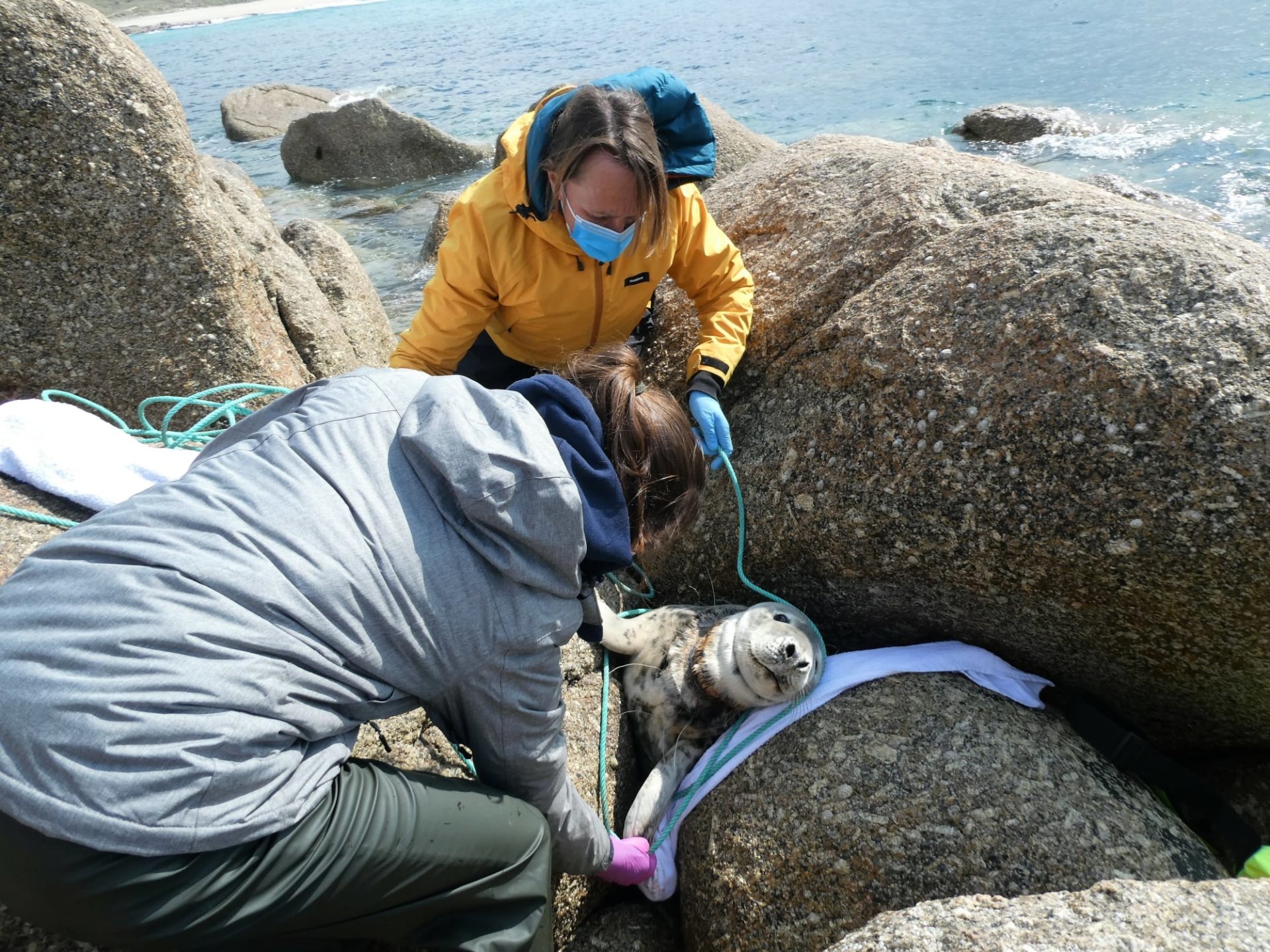 The Shark Trust has launched a new smartphone app...
British Divers Marine Life Rescue (BDMLR) Marine Mammal Medics in Cornwall faced a race against time and tide on Wednesday 28 April when an entangled juvenile grey seal was found trapped in between boulders at a remote location near Sennen.
The stricken animal was initially reported to the Cornish Seal Sanctuary by a member of the public who had luckily spotted it from the coast path near Gwynver Beach, and the details were passed on to BDMLR.
Two of their volunteer Marine Mammal Medics attended, as at this point it was not yet known the animal was actually wedged in place and unable to move. When they arrived they found it very difficult to get a safe, supporting grip around the animal to pull it free, with only its head and front flippers accessible.
Urgent help was called in, as the fast incoming spring tide was quickly coming up towards them and would submerge the seal in under two hours.
Five more Medics raced to the scene along with the Land's End Coastguard Search and Rescue Team with more equipment to help.
With the tide coming up around them, the team on site were now desperately fighting to get the seal free before it drowned, using ropes and other tools to prise and haul it out. With minutes to spare, she finally slipped free, completely exhausted from the ordeal and with little energy left. She was put into a seal bag and safely retrieved back up the boulders to the coast path and then taken around to the Coastguard's truck, where she got a ride back up to the top of the cliff.
From there she was transferred to a cage and taken to the BDMLR Seal Pup Hospital Cornwall for veterinary assessment and care for the severe entanglement wound that was 4cm deep at its worst across the back of her neck, though luckily largely free of infection. She now starts an arduous period of recovery and rehabilitation.
Following the rescue, the team at Cornwall Seal Group Research Trust photo-identified her from their catalogue as a young juvenile seal first spotted in December 2018 at a nearby seal haul out beach. Unfortunately, as many of these sites are completely inaccessible, she has never been able to be rescued previously, so it is fantastic to know that she has now been freed and is in safe hands after two years waiting for an opportunity.
It also helps BDMLR age her at a minimum of four and a half years old, meaning that at her rescue weight of just 44kg, she is severely malnourished and less than half the size she should be. The team have named her ‘Hattie Jacques'.
The next 48 – 72 hours will be the critical time for Hattie's recovery and we all have our fingers crossed that she will pull through her traumatic experience.