BDMLR were involved in an epic five-hour operation to rescue a stranded dolphin in Cornwall earlier this week.

On Monday 10 August, a call was received on the BDMLR (British Divers Marine Life Rescue) hotline regarding a common dolphin in the shallows at Mawgan Creek in the Helford Estuary, near Helston.
The area is well known as a strandings trap for dolphins, with many tidal muddy creeks, and a team of Marine Mammal Medics led by Cornwall Area Co-ordinator Dan Jarvis were dispatched immediately.
On arrival, accessing the dolphin proved to be something of a workout. It was stranded about 100 metres along from the nearest access point and getting to it required climbing over or ducking under a number of fallen trees along the edge of the riverbank. It was being supported on the water’s edge by the local builder who had found and reported it, and they had been there for three hours with it already. 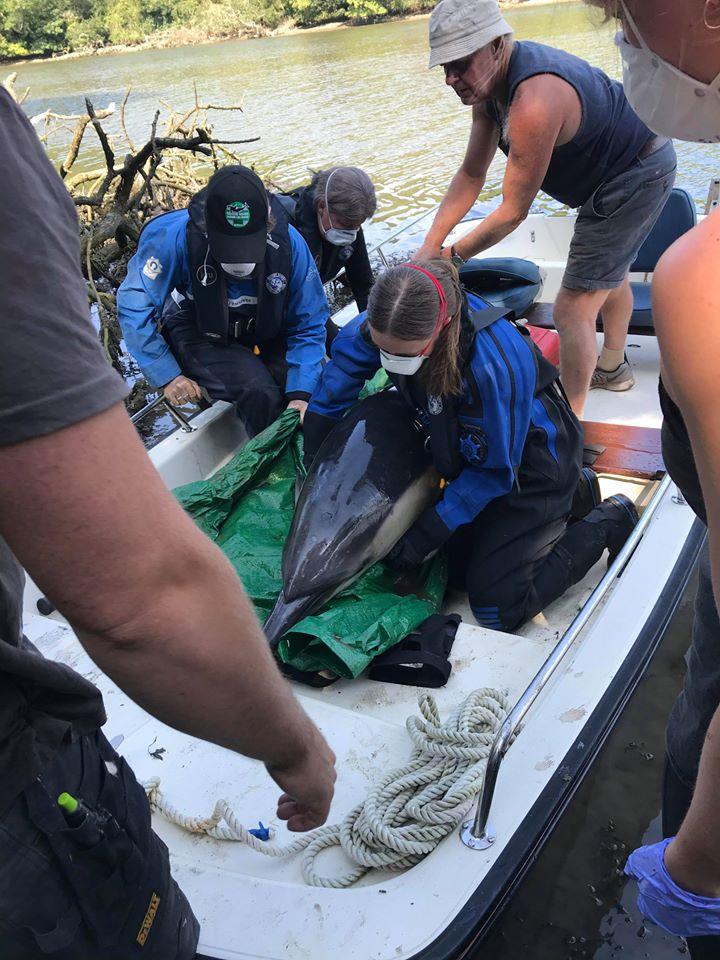 As more Medics arrived, they took over care of the dolphin and began first aid and initial assessment. BDMLR’s Veterinary Support Co-ordinator Natalie Waddington also arrived and began a full health assessment too, finding it to be just under two metres long, in moderate nutritional condition and with a number of old healed injuries. There was some concern about one eye that was being kept closed as it had a cut just above it and was bleeding slightly, but after further examination, it was deemed the eye itself was not damaged. The animal was very responsive and vocal throughout.
Based on the veterinary assessment it was decided refloatation would be appropriate, and it was marked with three orange stripes with an animal marker on its dorsal fin for future identification,in case it was seen or restranded again.
Obviously its getting lost in the tidal creek was the main reason it had stranded in the first place in this case, and with high tide having just peaked, releasing it back into the creek would of course leave a high risk of restranding and not an option. Getting it back to the cars to attempt a journey by road to the coast was also very difficult due to the number of fallen trees, and wading further out to get around them was also very risky due to the deep sinking mud. Boat was really the only and best option if one could be found. It was now a race against time and tide. 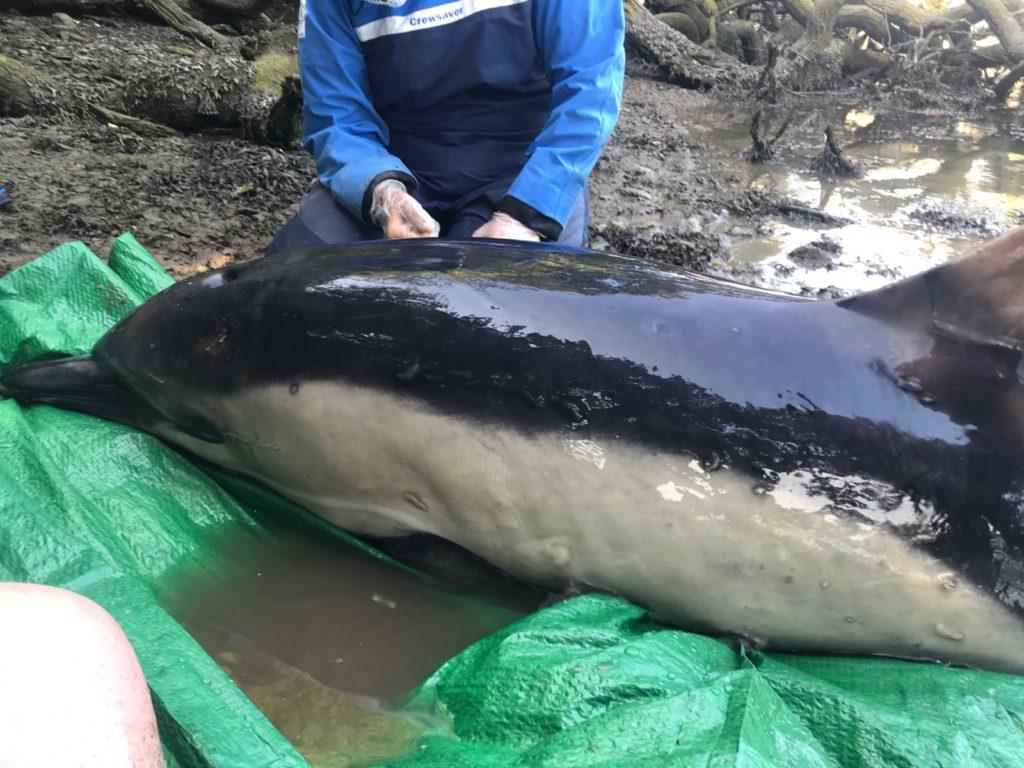 Luckily a nearby family out for a walk had offered use of their boat early on in the incident, so they were contacted and the boat launched quickly before the outgoing tide prevented it from being able to get out. The dolphin was carefully loaded on board, sat on a couple of wooden boards padded with a tarpaulin and stretcher, with Medics knelt astride it to support it in place. A sheet was kept over its back to help it stop drying out and protect it from the sun too, as four of the team headed seaward with their skipper. There was a fairly long journey ahead as Mawgan Creek is over three miles from the open sea, and the speed of course had to be kept reasonably slow to minimise stress to the animal while first aid and monitoring continued throughout.
Finally, once the boat had reached point south of Rosemullion Head and facing the open sea of Fal Bay, the dolphin was carefully put overboard in the stretcher and held in place to acclimatise to its new surroundings that it had suddenly found itself in. Encouragingly, it quickly showed signs of wanting to swim, and was supported for just a few minutes to be sure before the stretcher was let go and the dolphin released. 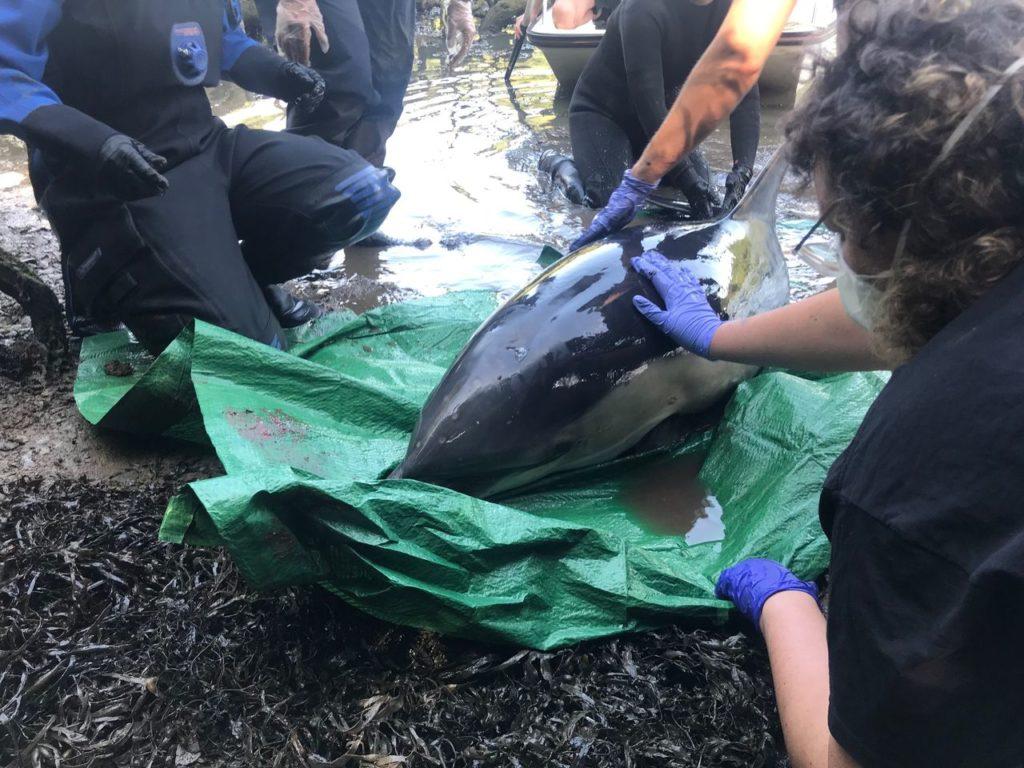 The dolphin drifted slightly for the first few seconds before findings its fins again, and took off strongly to the south and back into the estuary at first. The team followed at a long distance to continue monitoring as the dolphin headed across to the southern side of the estuary, taking care to follow parallel and prevent any disturbance from the boat that might cause any stress. After some time of swimming back and forth and one close swim past of the boat, it was last seen heading back out to sea strongly.
BDMLR would like to thank all Medics involved with this incident, as well as the local builders Simon and Leon, who found and reported it, and of course to Rodney Thomas, Lyndsey Thomas and Matt Small, whose boat was instrumental in this animal’s rescue.
Photo credit: Dan Jarvis and Polly Ford
Subscribe
Login
Please login to comment
0 Comments
Inline Feedbacks
View all comments
10,919FansLike
5,363FollowersFollow
1,108FollowersFollow
11,200SubscribersSubscribe