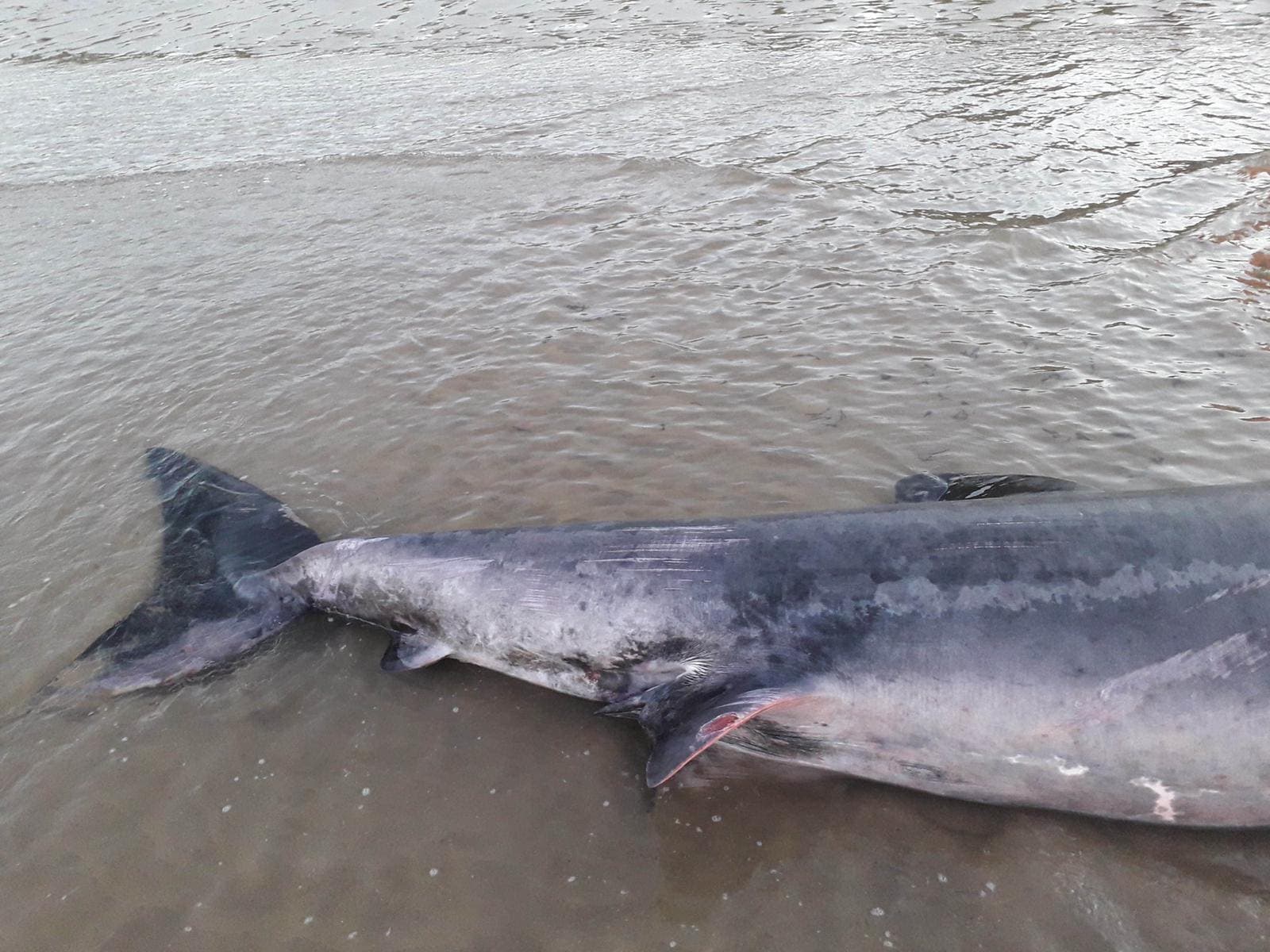 The call came in at about 6pm, alerting the charity to what was initially thought to be a live stranded whale. BDMLR Marine Mammal Medics were urgently mobilised to the scene, and on arrival discovered a large crowd of people assisting what turned out to be a large basking shark stuck in the shallows.

With the help of the local Coastguard and RNLI teams, together they managed to guide the nearly four-and-a-half-metre-long creature back into the water as the tide came in. Unfortunately, the shark appeared to be struggling as it was listing consistently over to its right-hand side and circling in the shallows, sometimes needing support from the rescuers. Potentially this could indicate it was weak, unwell or may even suffered some brain damage during the process of live stranding.

As they are fish, sharks obtain oxygen through the water passing over their gills, so while it was live stranded, the oxygen supply would have been much reduced and may potentially explain this behaviour – however, these are only possible reasons and there may be other explanations, too.

Despite attempts to move it into deeper water, the shark continued to head back to the beach where it restranded, and later in the evening was put to sleep by a vet due to the poor prognosis. It is thought to be a male and would've been around the size and age where it would have been maturing into an adult.

Basking sharks are generally a seasonal visitor to the UK, mostly being seen from Spring until Autumn, however there have been occasional sightings in Winter too. Satellite tagging studies in the UK show that they can move across the Atlantic to places as far afield as North America and North West Africa. They are most often encountered along the west coast of the UK, with sightings in the North Sea and eastern English Channel being somewhat rare.

They are the second largest fish in the ocean after the whaleshark and can reach lengths of over ten metres. They feed only on plankton by filter feeding – swimming along with their huge mouth open and using specialised ‘rakers’ in the gills to extract their food as it passes through them.

Basking sharks are listed as endangered by the International Union for the Conservation of Nature (IUCN) Red List and are protected from killing, harm and disturbance in the UK.

BDMLR want to thank all the Marine Mammal Medics, Filey Lifeboat Station, Filey Coastguard, Scarborough SEA LIFE Sanctuary and the RSPCA who attended, plus their Hotline Co-ordinator Teri, who did what they could for the animal under these unusual and difficult circumstances.