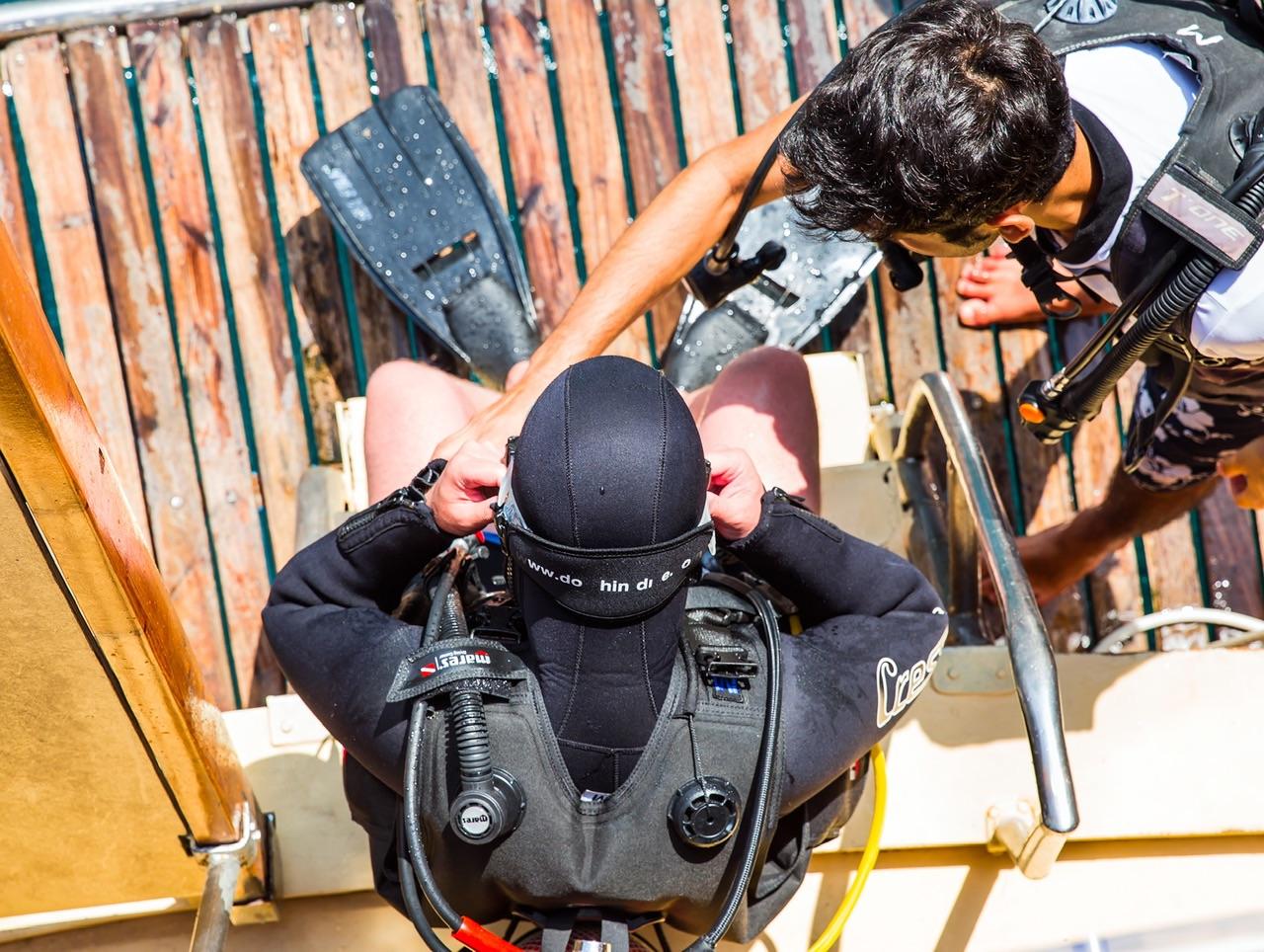 On a recent trip to Bonaire with his dive club, Rick (a pseudonym) was completing his fourth dive of the day, which was his 14th dive in a three-day series and his 145-lifetime dive. Certified approximately two years prior, Rick was 38 years old and in good health, with no significant medical history except what he describes as ‘athlete’s asthma’ as a child.

Prior to beginning his third dive of the day, Rick felt tightness in his chest. He discounted it as a result of eating leftover pizza for lunch and even mentioned that he needed to take an antacid. The chest discomfort resolved during the boat ride to the dive site, so he proceeded with the dive, descending to a maximum depth of 13m. He took lots of photos during the dive and occasionally inverted himself to see inside the reef. After he surfaced from the next dive, Rick boarded the boat and immediately noticed a change in his voice, a sore throat and crackles under the skin around his neck.

When Rick was completing the second dive of his Wreck Diver certification a year before, he surfaced completely exhausted with a burning sensation in his throat. After he removed his gear he noticed a change in his voice and what he describes as water under the skin around his neck. Others in his group discounted his symptoms as bad gas or water in the ears. That evening he took an over-the-counter pain reliever and Benadryl and went to bed early. All symptoms had resolved by the following morning, and he completed the last two dives of the certification without any problems.

A doctor at the local hospital on Bonaire performed a complete neurological assessment on Rick and diagnosed pulmonary barotrauma (pressure injury to the lungs) and subcutaneous emphysema (air under the skin). The chest X-ray was unremarkable. The treating physician noted no complications besides the subcutaneous emphysema in the neck, which did not affect the airway, so he administered high-flow oxygen and allowed Rick to return to his resort. A CT scan the following day revealed abundant mediastinal air around the heart and lungs and in the neck. It also showed at least two large blebs (cystic air pockets) in the apical regions of Rick’s lungs. He returned to the hospital daily so doctors could monitor his progress.

Due to the risk of pneumothorax during air travel, Rick was admitted to the hospital two days after the incident to breathe 100 percent oxygen for six hours. The doctor took these aggressive measures to speed Rick’s recovery and allow him to travel home with his group. A follow-up CT scan three days after the incident (and one day prior to his scheduled departure) showed the same blebs as before, but much less extra-alveolar air in the mediastinum. After consulting with pulmonary specialists both locally and in the US, the treating physician cleared Rick to fly home with his group.

Pulmonary barotrauma generally occurs at the end of a dive when trapped gas causes alveoli (air sacs in the lungs) to expand during ascent and ultimately rupture if normal exhalation is impaired by breath-holding or a lung problem. Gas from a ruptured lung can leak into one or more of four places:

The risk of pulmonary barotrauma is greater in people who have blebs in their lungs. Blebs are abnormal balloon-like air sacs most often caused by inflammation, which destroys the thin walls that separate alveoli. Although these are common in smokers, they have also been found in non-smokers. Blebs empty air slowly because of their thin, nonelastic wall. On exhalation during ascent, pressure can build, causing a rupture.

Rick’s pulmonary barotrauma manifested as pneumomediastinum. The principal symptom is a substernal ache or chest tightness. This is likely what Rick was feeling prior to his third dive. On occasion, a diver may experience sharp pain in the shoulders, back or neck that may be aggravated by deep breathing, swallowing, movement of the neck or trunk, coughing or lying flat. Voice changes, such as the ‘Donald Duck’ voice that results from breathing helium, are also common. The crackling sensation Rick described under the skin around his neck is known as subcutaneous crepitation (grating or rattling). The air trapped under the skin was caused when air escaped from the chest cavity and into the soft tissues of the neck.

Physicians trained in dive medicine recommend that anyone who has experienced pulmonary barotrauma is properly evaluated before returning to diving. Unfortunately, Rick didn’t recognise his symptoms during training dives a year earlier as subcutaneous emphysema, so he continued diving without talking to a doctor. Fortunately for Rick, he recognised his symptoms after the second occurrence and was properly treated.

Rick has since returned to diving after two successful surgeries to correct the blebs.

Before leaving for your next dive adventure, make sure your DAN membership is still active. If it isn’t, join DAN or renew your membership at www.daneurope.org

Interview with Karim Iliya – Underwater Photographer of the Week