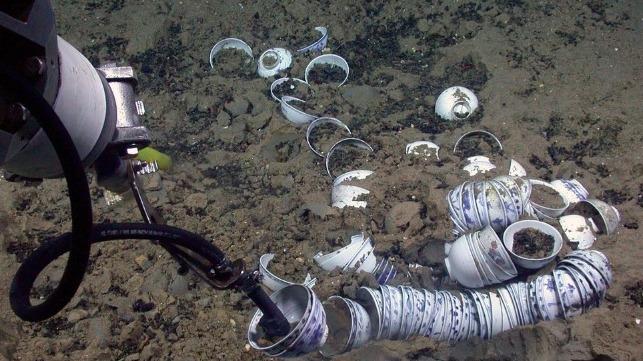 Ancient artefacts recovered during a salvage operation conducted in the eastern Mediterranean back in 2015 have been seized by Cypriot officials, leading to accusations from both sides.

Back in April, the privately funded Enigma Shipwrecks Project had released details of their salvage of an Ottoman-era merchant vessel that had gone down in the Levantine Basin – halfway between Lebanon and Cyprus – around 1630. It was chock-full of Ming Dynasty porcelain, Indian peppercorns, copper coffee pots, Italian stoneware and much more.

At the time, the project's archaeologist Sean Kingsley said: “This is truly ground-breaking, one of the most incredible discoveries under the Mediterranean.”

An ROV was employed by Enigma to recover nearly 600 items from the wreck site, with post-excavation work continuing on the ancient goods at the company base in Cyprus – and it is this haul that is now the centre of the controversy.

The Cypriot government has objected to the retrieval activity in strong terms, accusing Enigma of ‘violently extracting objects, causing destruction to their context', with an intent to sell.

From their side, Enigma has stated that the wreck site is not in Cypriot waters, and that it has no intention of selling the collection – instead, it would like to see the artefacts on public display in a museum.