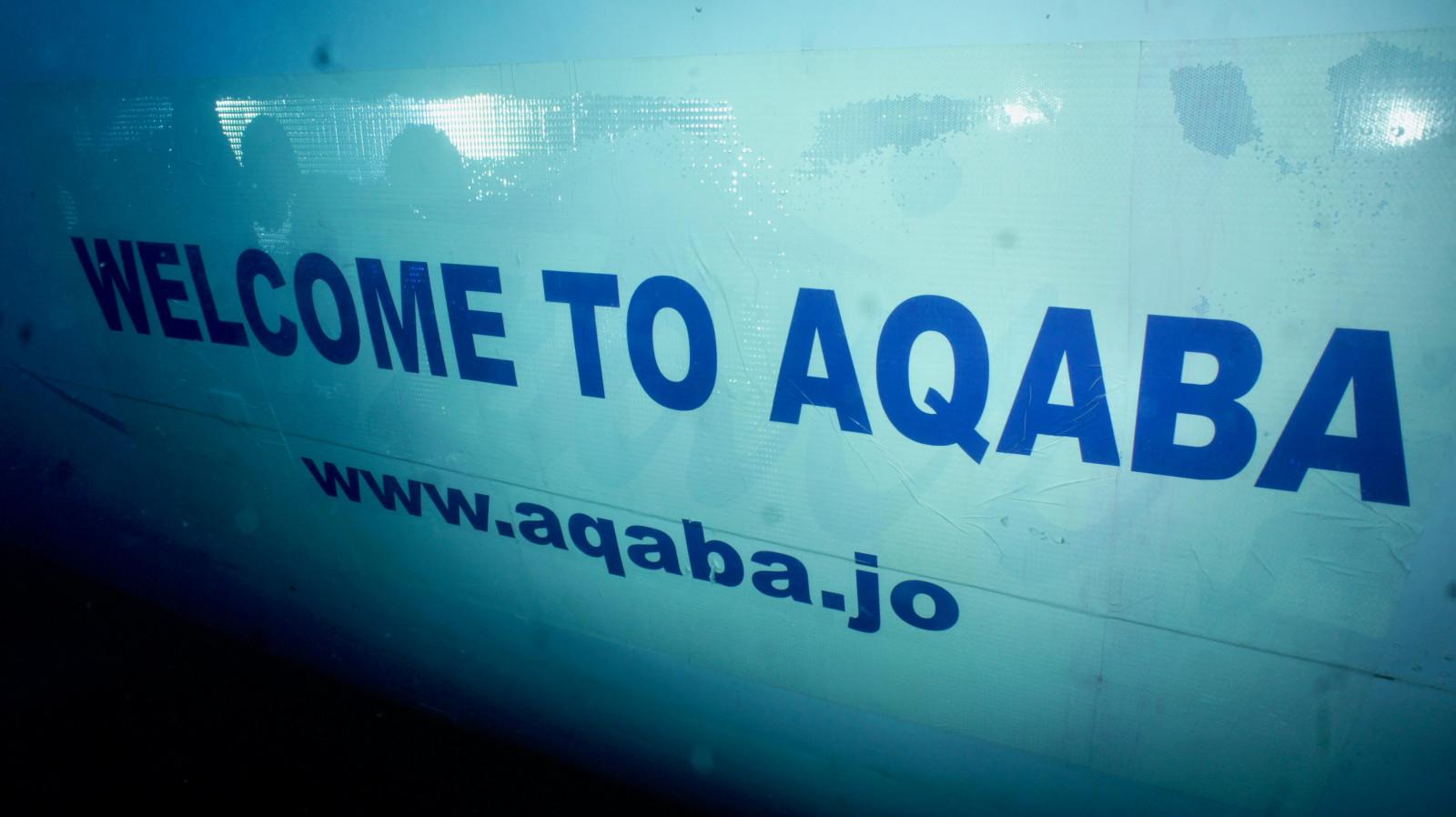 Safety stops are best done when you’re completely horizontal in the water so that your entire body is at the same depth and decompressing at the same rate. And if you’re holding onto a line in a current then there’s more space for other divers to be at the correct depth.
Contents hide
1 The Jordan coastal city continues to evolve its artificial reef scene, adding a gigantic Lockheed TriStar civilian airliner into the mix
1.1 Lockheed TriStar – Down she goes!

The huge ghostly white shape was clearly visible beneath our dive boat, and the excitement on board was evident as everyone kitted up and prepared for our first dives on Aqaba’s newest artificial reef. Ever since seeing the enormous Lockheed TriStar aircraft scuttled a couple of days before, we had been champing at the bit to check it out in its new home on the seabed – and now was our chance.

Dropping into the water off the back of the dive boat, we began descending towards the aircraft, which looked even more massive ‘in the flesh’. The visibility was a little milky, but we could still see 90 percent of the aircraft clearly, which only reinforced the sheer size of its bulk – it absolutely dwarfs the C-130 Hercules military transport airplane that was sunk a couple of years ago.

As it was still fresh in the water and hadn’t been ‘cleared’ of sinking paraphernalia, there were still ropes attached to the cockpit and scattered around the wings and tail fin, but during our time on the water in and near the wreck, we saw clean-up teams removing and recovering these items, so by the time it is being dived by members of the public, it was be free of all this.

The cockpit sits pointing up the slope in just 10m, and then the bottom of the tail fin is in 26m, which provides something of interest for all levels of certification, though I wouldn’t be taking open water divers inside the aircraft.

Where to begin with something of this magnitude? Let’s start at the cockpit, which can be accessed through the open main door on the left-hand side. All of the controls have been left in-situ, which means it is a bit of a squeeze getting through the access door in your scuba kit, but it is amazing to see all the dials, switches and levers. It will be interesting to see these slowly but surely disappear under a coating of marine growth in the coming years.

From the cockpit you can swim down the interior of the main fuselage. It is simply huge. The central row of seats has been removed, but the sets of three on either side remain in place, and even still you can have several divers shoulder to shoulder and not feel claustrophobic.

You can explore the staff sections, with the spaces left for food carts, etc, and – if you so wish – check out some of the many bathroom facilities!

Light streams in through the various open doors and through all of the windows, so it does not feel dark inside, and a torch is not needed. However, at the rear of the aircraft a section of flooring has been removed and you can drop down into the cargo hold. This area gets relatively tight and once you head around the corner and back under the main fuselage, it is very dark, so you’ll need a dive light if you decide to head down into this area. We surprised a small cuttlefish that had already set up home down here – amazing considering it had literally been down two days.

Also at the rear of the aircraft, you can swim up and into the vast turbine from the monster central engine. This makes for a great photograph, with the blades of the turbine clearly visible, and then you can turn around and head out through the vent on to the top of the aircraft – again, this can make a fun photograph with your dive buddy hovering in the middle of it.

Outside the aircraft, you can roam around under and over the giant wings, and around the back of the jet engine vents. As we said, at the moment it is a bright, shiny white, but give it a few weeks and I am sure this will be well coated with marine growth which will tone it down somewhat.

Photographers will have a whale of a time on the TriStar. As well as the aforementioned turbine, vent and cockpit areas, shots of divers around the outside can also be very effective, and I look forward to seeing the creative images people come up with in the coming months.

However, there is much to enjoy and explore even if you don’t have a camera, and once this aircraft has become colonised, it will appeal to those who aren’t that into wrecks. The C-130 Hercules is a prime example of how artificial reefs develop. It only went down in November 2017, but already, the main fuselage is heavily coated in algae and marine growth, and under the wings is draped with large, vibrant soft corals.

Lockheed TriStar – Down she goes!

Just two days previously, we had joined a horde of media from around Europe to witness the scuttling of the TriStar. We had a prime seat on board one of the many boats jockeying for position around the aircraft, which was secured in place with various ropes and lines.

We were surprised how close to shore it was located, but at the chosen site – next to the existing King Abdullah Reef dive site, and adjacent to Aqaba Container Terminal – the reef drops down fairly quickly to a decent depth, which meant that the plane would end up on a slope in 15m-28m, providing something for all levels of diver.

The Aqaba Special Economic Zone Authority (ASEZA) obtained the L-1011 TriStar plane, a non-Jordanian commercial that had been out of service and parked at King Hussein International Airport for several years, with the intention of sinking it as an artificial reef, further bolstering the already impressive line-up along Jordan’s coastline.

There is the Lockheed C-130 Hercules military transport plane, which was put down in late-2017, close to another sunken oddity, the M42 ‘Duster’ tracked anti-aircraft gun; the Cedar Pride, a 74-metre cargo vessel that was sunk in 1985 and is now smothered in coral growth; and two technical-depth wrecks, the Taiyong and the Al Shorouk.

And just a few weeks before, a vast collection of military vehicles – light tanks, heavy tanks, armoured cars, anti-aircraft guns, field guns and even helicopter gunships – were put down in a ‘battle formation’ along a sandy ‘road’ between two relatively barren reefs. These are going to be ‘off-limits’ to the public for at least six months, to allow marine life to colonise them before divers are allowed to visit, but it means next year Aqaba’s artificial reef collection will be an amazing sight. We had a sneak peek at them and they present a truly awesome dive site, and already damselfish had laid eggs on them, squirrelfish were in the engine rooms, moray eels had staked a claim to nooks and crannies, and a starry pufferfish was vociferously defending two of the light tanks it had taken a fancy to.

ASEZA had assigned a national company to dismantle the TriStar aircraft, transport it to Aqaba port and re-assemble it there. The sinking site was completely devoid of healthy coral reef, and ended up in a sandy area surrounded by seagrass meadows and some fairly ropey coral heads, so the presence of the aircraft will create a rich habitat for fish and other marine organisms. Before the sinking, all hazardous materials were removed to comply with the environmental best practices.

Initially, the TriStar seemed reluctant to head to its new home, but slowly, ever so slowly, she began to settle, with her left wing disappearing below the surface first, then the back end. She then evened herself out, and with increasing speed began to sink lower into the sea. Within minutes, only her tailfin was visible, and then that too was gone, leaving frothing water as the final air spaces emptied.

A cacophony of boat horns, whistles and sirens accompanied her final departure to the seabed.

“However, there is much to enjoy and explore even if you don’t have a camera, and once this aircraft has become colonised, it will appeal to those who aren’t that into wrecks”

“The central row of seats has been removed, but the sets of three on either side remain in place, and even still you can have several divers shoulder to shoulder and not feel claustrophobic”