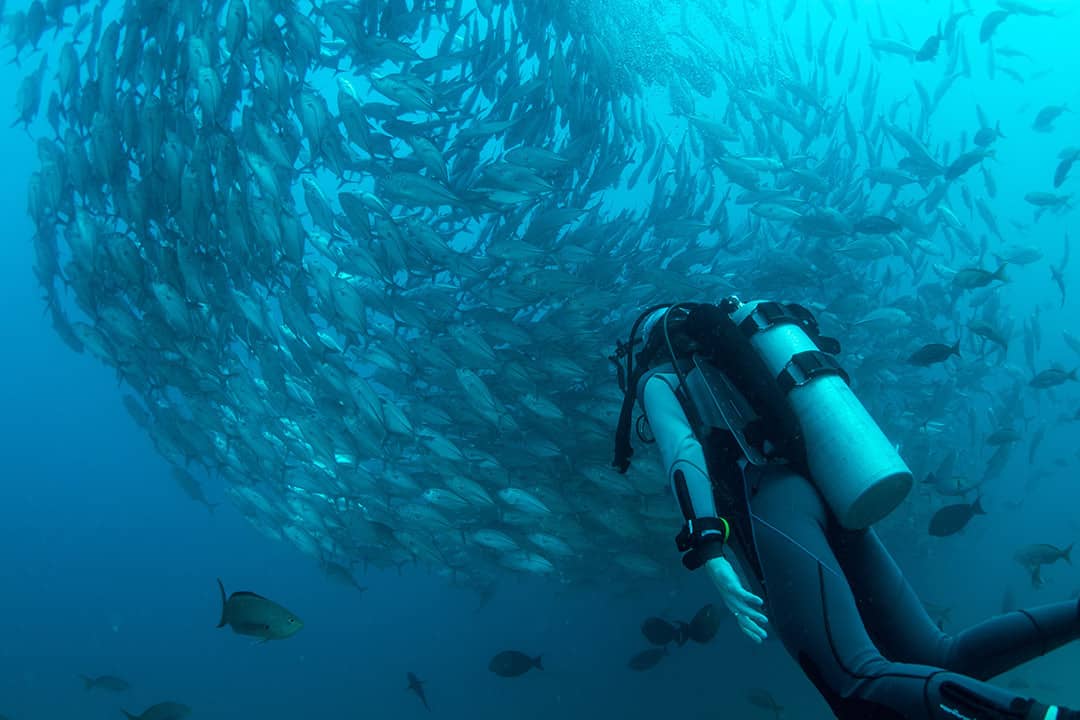 Older, overweight scuba divers are being urged to shed pounds to avoid an underwater heart attack. That’s the advice from a large study published in the European Journal of Preventive Cardiology.

Older, overweight scuba divers are being urged to shed pounds to avoid an underwater heart attack. That’s the advice from a large study published in the European Journal of Preventive Cardiology.

“Divers who learned to dive years ago and who are now old and overweight, with high blood pressure and high cholesterol, are at increased risk of dying.”

It is estimated that around 3.3 million Americans and 2.8 million Europeans will scuba dive this year. While recreational diving fatalities are rare (181 worldwide in 2015, including 35 in Europe) the number involving cardiac issues is climbing, according to these findings.

Cardiac events are now the second leading cause of death behind drowning.

People who pay to go diving must learn skills and theory and be screened for fitness. But, after that initial screening, certification to scuba dive lasts for life.

“This is where we see an increase in risk,” said Dr Buzzacott. “It's not commonly new divers who have health problems, because they have been recently screened. It is older divers who have not looked after their health.”

Until now there has been no clear picture of how common cardiovascular risk factors are among active divers. Previous research has been limited to surveys of dive club members or insured divers. This was the first study conducted among divers in the general population.

The researchers used data from the Behavioral Risk Factor Surveillance System (BRFSS), a nationally representative telephone survey of US adults conducted by the US Centers for Disease Control and Prevention (CDC). Scuba diving was included as an activity in the 2011, 2013, and 2015 surveys.

The three surveys represent nearly 736 million people, of whom around 498 million (68%) had been active in the previous month and, for 113,892 people (0.02%), their principal activity was scuba diving.

This analysis compared the 113,892 scuba divers with a group of 338,933 active people matched for age, sex, and state of residence whose main activity was not scuba diving. The data shows that one-third of scuba divers are aged 50 years or older. They are often well educated, more than half earn at least US$75,000 a year, and most are married with children.

Nearly half of divers were overweight (48%) compared with 43% of non divers and one-third of divers had been diagnosed with high blood pressure and high cholesterol.

Dr Buzzacott advised all divers to have routine fitness assessments with their doctor, and tackle risk factors that otherwise could lead to a fatal cardiac event while diving.

He noted: “Never before in history have so many people been exposing themselves to these extraordinary environmental stresses and, for the first time ever, we now have a large number of people who have spent their entire lives regularly scuba diving.

“None of us are as young as we once were and it is important that we stay in shape for diving. The father of scuba, Jacques Cousteau, was diving at 90 and the current world’s oldest diver is 94. He looks like he's in great shape and that is the role model for us all if we want to keep diving into our senior years. I certainly do.”

The research was published in the European Journal of Preventive Cardiology. The study was funded by the Divers Alert Network.