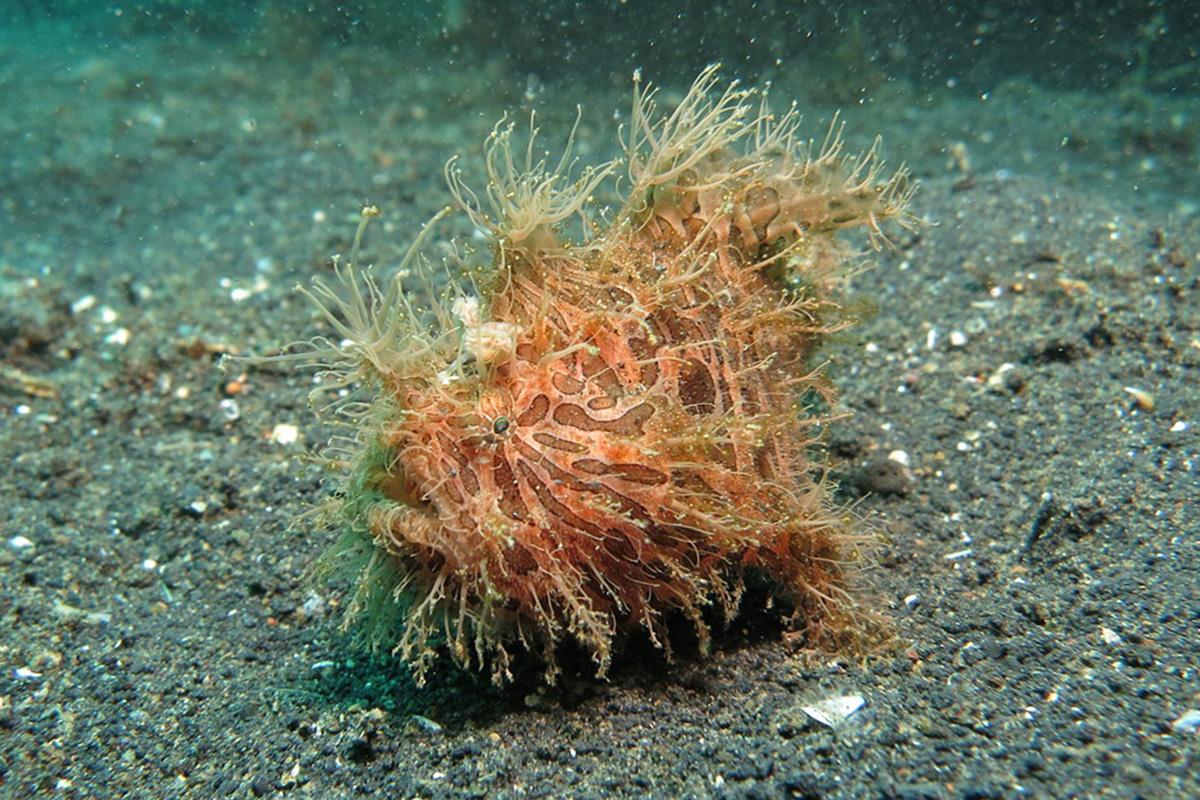 North Sulawesi is home to many Amazing Camouflaged Critters

From the brightly coloured to the oddly shaped and of course the masters of disguise. North Sulawesi boasts more than its fair share of unusual marine creatures. Here we look at 5 amazing camouflaged critters. These little bottom dwellers can be incredibly had to spot, fortunately, the dive guides at Gangga Divers are experts in this field.

Inimicus didactylus is known by many names – demon stinger, devil stinger fish, and even bearded ghoul. As these names may imply, this is not a fish to be messed with. It is closely related to stonefish and has numerous venomous spines, which it can raise to ward off predators.

This fish camouflages itself in sandy and coral seabeds that it can be found partially buried in. Its patchy red or sandy yellow colouration and knobbly appearance blends masterfully with its habitat.

The bobtail squid is possibly one of the cutest critters in the ocean. However, it also benefits from one of the most incredible symbiotic relationships. This squid is nocturnal and harbors a bacteria called Vibrio fischeri. This bacteria allow the squid to produce a luminescence that mimics the light coming from the moon and stars at night. Fish looking up from below will see only the light without the shadow cast by other prey.

One of North Sulawesi’s most famous residents is the mimic octopus since its discovery in 1998. This astounding animal can mimic a number of different sea creatures using camouflage, shape, and movement.

The mimic octopus is naturally light brown or beige, but can change to white and brown stripes to imitate poisonous species like lionfish and banded sea kraits. Many videos of this octopus can be found on the internet and will blow your mind how fast it is at shape and colour shifting.

There are over 200 species of scorpionfish worldwide with a number of these being spotted around Gangga Island Resort & Spa. While you’re diving you’ll need to keep your eyes peeled for the leaf scorpionfish, which resembles a dead leaf on the sea bed. Also look out for the Ambon scorpionfish, a shaggy scorpionfish with large growths above their eyes that blend in perfectly with the soft mud, dark sand and weedy bottoms. Ask your Gangga Divers dive guide to help you look out for more types of these strange fish as well.

Sometimes called the striated frogfish, this fish can actually have a very variable appearance. The environment the fish lives in determines how hairy or striated it is, as it can actually change its appearance within 3 weeks of moving to a new location! Its skin filaments and blotches on its skin can change from very long and striking to hardly there.

Many other frogfish are also well camouflaged in their environments. They often have strange bumpy, filament-covered bodies that look like algae-covered rocks or coral.

There are so many wonders of camouflage in the waters around Gangga Island that you will need plenty of time diving to scour the seabeds. The dive guides and instructors at Gangga Divers are great at spotting hard-to-see critters but when you see one yourself it’s a fantastic feeling. Have you ever spotted any amazing camouflaged critters yourself when diving?